Call out the bad apples

I was originally planning to post the content of this blog as a reply in response to my previous post, "Is it too early for commitment" said the developer but seeing as it ended up being the length of a blog post I though I should promote it to one.


For those of you who have not read my previous post I would suggest that you go and read it. But here is the comment from tbscope that upset so much that I needed to respond.

"Is it too early for commitment" said the developer

"Stories are part of every community. They communicate culture, organize and transmit information. Most importantly, they spark the imagination as you explore new ideas. They can ignite action."


-Whitney Quesenbery
I am looking for all KDE developers who have had to deal with program data requirements to give me their opinion on an issue I have and hopefully we can come up with an inovative way to solve the problem, in true KDE style. If you do not have time to read the full post please skip down to the technical question and add a quick comment.
Read more »
Posted by real_ate at 08:03 11 comments:

Graduating from college, throwing away the shite I collected over 22 years of my live, moving to another country, finding a place to live, getting my first job and where do I find myself? Back in the throes of Open Source.

I've always found it a struggle to find where my life, work and my passion for open source can all live together without stepping on each other's toes. Just now that I'm starting to try and get used to the norms of office life and working for a living ( sigh ) I'm finding myself trying to define where my time should be spent. We are all familiar with working 9 -5 , so that one is simple enough. Most of us know about "time well wasted" as I like to call it, where you come home from work and spend way too long making a cuppa tea to ever be considered an efficient tea maker or you sit in a chair looking out the window at that cat that has made it onto your car and seems to be making some kind of nest. Time well wasted is always time well spent, it helps to keep us sane! Some of the really lucky ones know about "Hobby Time" and are little known Ultimate Frisbee champions or have an almost complete collection of sea shells that resemble pop stars. But in all this mishmash of social norms where does the term "Open Source Development" come in?

I do not have the good fortune of having a 9-5 that satisfies my Open Source itch. I am certain that I have too few brain cells working during any of my "Time well wasted" sessions to even know what a computer is! So then is my Open Source Time doomed to share a room with random collectables and fringe sports? Do I have to class my Open Source Development as a hobby and stop refering to it as "my calling"? And more importantly how do I fit Open Source into my busy schedule of TV, Drinks with the guys, dancing in sweaty nightclubs and counting the amount of peas I have left in my freezer!? These are very pressing questions that hopefully I will soon have an answer to.

A Long time ago I was crap at time management. I'm still crap now but I like to think I'm getting better ;) One of the things that I found on my journey of self enlightenment was David Allen's Getting Things Done® and I found it FANTASTIC! I was a mess of lists and to-do items and forgetting stuff before David Allen and decided to follow his teaching like they were gospel! .... that lasted about two weeks, maybe 3 if you count having the lists right and not following them. I think the problem was that it didn't fit into my lifestyle, I was a student who was interested in a whole load of things and needed to balance research for 8 college modules with what a wanted to know in the world of open source! If I were a high flying banker or an office goer then I'm sure the system would have worked perfectly but it was lacking something that I needed. It took me a fair deal of time to figure out what that something was.

And now to the point of this long post. The Getting Things Done® method was wrong for me because the "Things" that I wanted to do were not defined. These "things" that David was trying to sort in such a fantastic way were things that lived in 9-5 time. The "things" that I wanted to sort out were usually crazy Ideas that began their life while I was counting peas: "Wouldn't it be great to have an Open Source Project that counted all the peas in my freezer and geolocated all the farms that the peas came from". These crazy thoughts were not definable, could not be put into lists and could not be thought of as "things". Instead they are stuff. Stuff is more fuzzy, less defined and does not conform to to-do lists and schedules, until now!

This long winded blog post is a way for me to announce a new project. "Getting Stuff Done". This name may spark some lawsuits but for now I'm going to leave it as a codename, so that it gets across the idea behind this project. Its a simple tool that aims to organise lists in a non-standard way, so that they are more human and much more malleable. I have the first screenshot here: 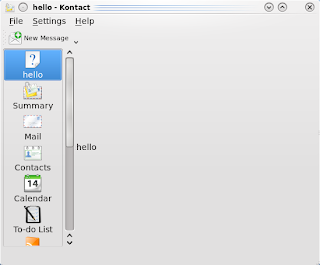 The more well read of you will recognise this as the simple Kontact "Hello World" example. This does mean that the project is in its most infant stage, but each long journey begins with only a single step.

Oh yes, that's right! We now have full OSM rendering. It has been quite a struggle to get to this point but the hard work has really paid off. The results are just beautiful! I'm not just braging about my own code, because as it happens there is a lot of work to do to get the OSM rendering in a pretty way, but instead I'm talking about the experience of loading an OSM file. It looks marvellous! See the video below and notice how precise the positioning of the lines and nodes are with respect to the underlying OSM tiles ( I know this is obvious but it just looks so synchronised! ).

I don't know about you guys but seeing that map rendering, where the data has been collected and modified with a lot of hard work from a lot of people, really gives me a sense of grandeur. Fair play to all the people in Open Street Map, my hat is really off to you guys ;)

Link for those reading this on the planet.
Posted by real_ate at 18:51 No comments: